Alright, I have some catching up to do. I've been a good boy about seeing shows for the last month or so, but not so good about documenting, and my boyfriend has informed me it doesn't count if I don't document it. Run the Jewels at the Fox happened over a month ago, a Friday night at the start of Feb., but I'm only getting to this now, so here's to being better at my practice. So, to that point:

There were three openers: The Gaslamp Killer, Spark Master Tape, and Cuz. I didn't see any of them. Somehow I was still eating ramen at a spot near the Fox at 9:30, then at the venue past 10; I guess I wasn't trying to see any of them. Arriving a few minutes before Run the Jewels came on, the sold-out crowd was in good spirits, and once their set started, most of the balcony was on their feet, dancing and chanting along as the duo tore through familiar tracks from their three LP's. The lasers and stage lights were on point, and if you've got a favorite song, they probably played it. Dj's Shadow and QBert both took the 1's&2's for their productions. End of the day, I even bought a T-shirt, so I guess you could say I'm a fan. Check them out if you can get tickets.
No comments:

Although Woods are a Brooklyn band, they seem to have at least a part-time residency in the Bay Area--hosting the annual Woodsist Festival in Big Sur and Point Reyes, and regularly playing club shows promoted by FolkYeah. On their last swing through The Bay, they played a Thursday, January 19 show at Sweetwater in Mill Valley, Friday at Fernwood Resort in Big Sur, and a foodbank benefit at Gallery 16 in SF. I caught the Thursday show, with The Range Of Light Wilderness opening. The opening trio was enjoyable, giving a stripped-down jammy vibe with three part harmonies and earnest lyrics.

Woods' set was a satisfy blend, starting off with a few songs from their most recent album, City Sun Eater in the River of Light, before getting into older material, including a personal favorite, "Cali in a Cup," off the 2012 Bend Beyond, further evidence of their California connection. Their set was tight as they knocked psychedelic folk tunes, with some longer variations from the album versions, closing with a Grateful Dead cover. Be sure to catch a show for some happy feels next time they're in the area.

Show 2/52: Tim Presley and Cate Le Bon Cast a Spell at the Chapel

At the show tonight I got to thinking about how prolific Tim Presley is, and I got to admiring his work ethic. It was my fourth encounter with him over the last year, and though a couple of those were more incidental at festivals, they wouldn't have happened at all if he hadn't kept on showing up and rocking out. And man, does he show up. As White Fence, he has some crowd pleasers, but he's also difficult to pin down, each show flowing a bit differently, suggesting experimentation and constant tinkering. His songs under Tim Presley tend more toward this abstract side, which was entirely enjoyable to float along with, especially in that great peaked room of The Chapel.

Cate le Bon and Tim Presley are friends and collaborators, sharing bandmates and albums. The album they did under the name DRINKS is fabulous, dahling, and I hoped they would play a couple songs together (although it turned out that they did not). Anywho my first time seeing le Bon, I wasn't sure what to expect, but she was a total boss on the guitar and she's got a great haircut. Her set tapped into a transportive spooky something-or-other that was still upbeat and accessible. After the last chord was played, we felt totally content with a night well-spent under the spell of those two charmers. 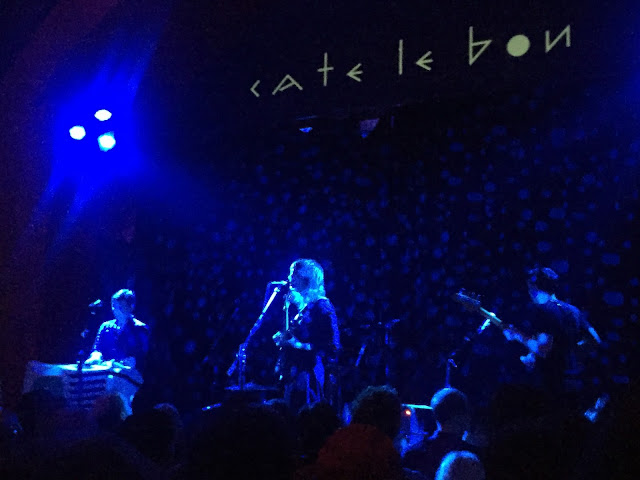 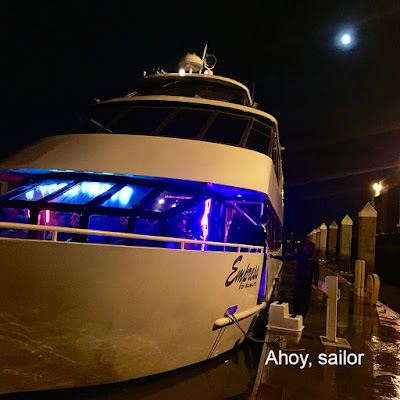 Well it just so happened to be my birthday, and I had mentioned to a couple friends that I felt like doing something weird. One of them caught wind of this party (on a boat in the SF Bay) featuring a confluence of comedy, performance, and experimental music, and so of course I was in. We boarded this floating temple of weird at Pier 40, and like the pair of dice hanging from the cab driver's mirror, the glow of Constance Hockaday's neon installations told us that this boat was rare.

After we pulled away from the dock, our host, Dynasty Handbag, strutted onto the yacht's dance floor and dove right into her performance of improvised satire, choreographed dance routines, and an unshakable sense of American decay.

Other participants included:
MSHR, an electronic noise and lights improvised freakout that reminded me of futuristic gnome creatures mining the weirder parts of their brains to concoct a cacophony for their captive audience.

International Freakout a Go-Go, a fitting danceparty and video display.

I had determined to be present for the show, so I didn't capture any media, but plenty of other people have, so check 'em.

BAY DIRT now features event listings, and the research to keep those up to date is pretty motivational to get out and see some of the great music that The Bay scenes foster, and that passes through the area. So, 52 shows in 2017 seems like a pretty good goal to keep this ball rolling. It'll be fun to look back at year's end--maybe I'll do a top 10! 😱  Anyway, I've put it here, the terms given, the oath is set, so now I'd better do it. Stay tuned for more. 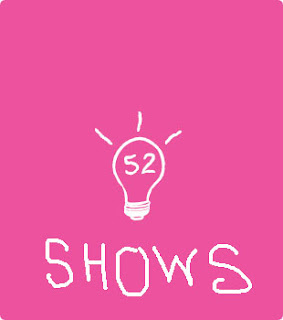